A few of us decided to have some fun and try to get 36 carriages for the Ghan up and running on one of our tracks. A few weeks ago at attempt 1 we used Baldwin Park and got up to about 15 carriages, but we just could net get it to work and the carriages kept on coming apart, so last week we tried it on McEvoy Junction and were successful. 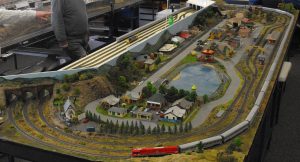 Later, we tried it with 45 carriages and 2 Locos.

Wonderful news – CMRCI has joined the ranks of the Australian Men’s Shed Association (AMSA). Watch this space for more details coming soon and also in the Club Bulletin.

A CAPITAL HOBBY
The history of Canberra Model Railway Club Inc.
The club history has been completed. It took months of research and writing for Ron Geeves, supported by John Webster to bring the history to fruition.
Due to COVID, the item could not be published until after August 2021. The volume is now available for sale at a cost of $40.00. 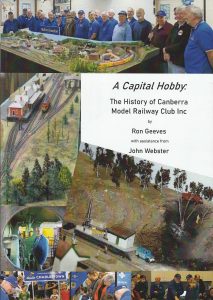 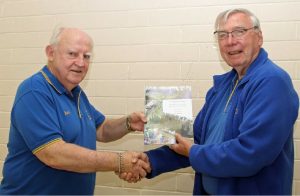 The Book Front Cover and The President handing over the author’s copy to Ron G.

The club’s newest layout has been completed, and was officially named after our late President, Peter McEvoy, and was called ‘McEvoy Junction’. 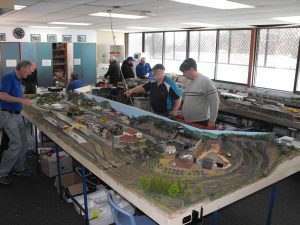 Club Members Ironing out any bugs on the new layout

The club’s new layout was officially named ‘McEvoy Junction’ on Saturday, 31st October at 2.30 pm in the Club’s Rooms. Peter’s family was in attendance and many club members were in attendance. The new layout, ‘Baldwin Park’ and ‘Charlestown’ were all operating, all without any glitches. Read all about the event at CMRCI Bulletin November 2020.

CMRCI COMMUNITY INVOLVEMENT PROGRAM
The CMRCI undertakes visits to retirement homes in order to provide entertainment and an element of interest in model trains to their residents.  We also take our layouts to church and school fetes and other public venues; again to provide a form of entertainment, but also to arouse an increase public interest in the hobby.  Providing information about our club to potential members is also an aim, albeit secondary.

The Club takes either our children’s U-Drive layout, or our large exhibition layout, depending on the space available and the audience. The reaction by both children and adults to the layouts is universally good. 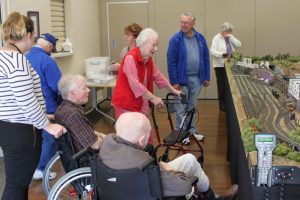 Members showing off our wares at a local retirement village.

CMRCI has produced a children’s U-Drive layout, named Charlestown in in honour of, and to remember our long time member and friend Charles Schuster, who passed away in 2017.  Charlestown was formally launched at the Club’s Expo on 24 March 2018 by Janet Schuster and Ms Suzanne Orr MLA representing the ACT Government who provided the grant that enabled construction of Charlestown.

Charlestown is leading a busy life with appearances at school fetes, etc and at the Bunnings Majura Christmas event. The layout will be a primary promotional tool at various markets and events in the period leading up to our annual exhibition. 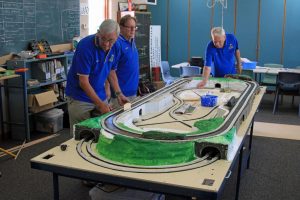 Members at work on Charlestown during its construction 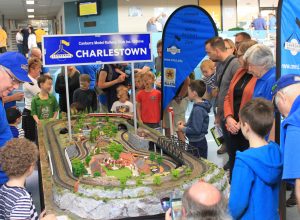 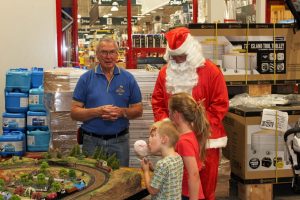 The images below show the finished layout 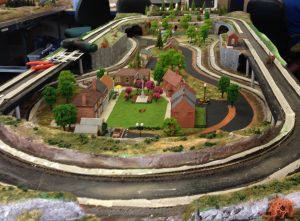 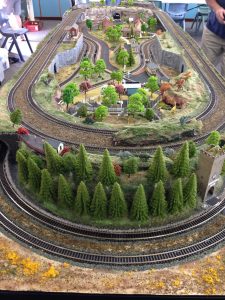 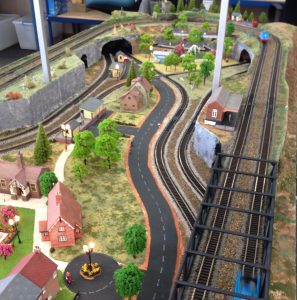 Charlestown had a number of outings in the early part of 2020 to showcase our Annual Exhibition scheduled in late March. Unfortunately due to CoViD 19, it had to be cancelled.

The CMRCI Christmas Dinner is planned for Wed 15th Dec at the Canberra Labor Club in Belconnen. Come along if you have not yet booked a seat. Contact Phil Y.